Differences between solids, liquids and gases on a molecular level.

In the biology class, our teacher Ceci asked us to watch and play with a simulation of the different states of matter on a molecular level. Then, we had to write a paragraph, including pictures, explaining the differences and similarities between the different states, and explain the example of the water molecules. This work was in pairs, and I worked on behalf of Sofia Mele.

Gases, liquids and solids are all made up of atoms, molecules, and/or ions, but the behaviors of these particles differ in the three phases. Gas molecules are well separated from one another with no regular arrangement, liquid are closely packed together with no regular arrangement either, and solid are tightly packed together, usually with a similar pattern. A clear example to see the change between this states of matter is water. When you let water freeze, it becomes ice, which is solid. Then, if you melt the ice, it becomes liquid, and finally, if you heat it, it becomes gas because the particles evaporate. The same happens the other way around, you can let gas condensate, and turn into liquid. Then, you let the water cool and it becomes ice. In this image we can see how the molecules vary depending on their state;

Here, the image shows water molecules in the three different states, and how they change from one state to the another; 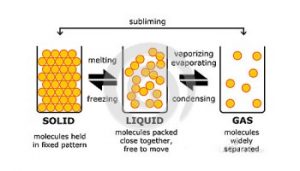